I recently wrote about a house that has a great kitchen. As the homeowner described what she loved about her cooking space, she casually mentioned the paper towel holder. Stop the presses. “The paper towel holder is one of your favorite things about your kitchen?” I (incredulously) asked. “Oh yes!” she replied. “I spent a lot of time thinking about the paper towel holder!” Readers, this is how stories are born.

I wrote about that kitchen, complete with a shot of the paper towel holder provided by the homeowner. It turns out she’s not alone in her consideration of this workaday detail. 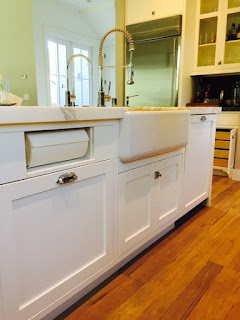 This is the paper towel holder in question, the first of its kind I had ever seen. As the homeowner said: “I love this idea because it keeps the towels handy but hidden.”

The kitchen was created by interior designer Jennifer Tidwell, architect Heidi Richardson and the homeowner. “This is the room I spent the most time on during the planning phase, and we went through several designs,” the homeowner said. “It was worth it, because this is where I spend most of my day.” 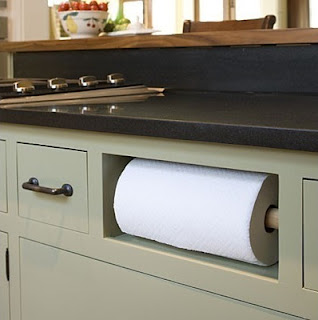 It’s probably a safe bet that most Americans who use paper towels have them sitting on the counter in a free-standing vertical holder or hanging from a horizontal bar that’s mounted to the wall or underneath an upper cabinet. No one would accuse these rolls of being decorative (the prints of flowers or retro appliances notwithstanding), but anyone who has just spilled a glass of milk or has their hands covered in cooking oil will attest to the fact that easy-to-access paper towels are a must.

The benefit of having the roll mounted under the counter is twofold: First, you’re keeping a utilitarian item close at hand without making it a kitchen focal point. Second, you now have one less thing cluttering the countertop. 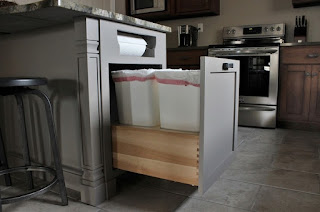 Interior designer Cherie Miller of CDH Designs liked the idea so much that she added the feature to her own kitchen. She says she had her cabinetmaker create one as a trial run for a job she had coming up. He used a dowel rod, and for ease of changing rolls, the top of the opening is a little wider than the bottom (you pop the dowel up and out when the roll is empty). In Miller’s kitchen, the opening is roughly 13 inches wide at the top and 5 inches high. “The height is a bit of a squeeze for some of the larger towel rolls,” she says. In the subsequent project, she used a retractable rod (similar to most toilet paper holders) and made the opening 13 inches wide and 5 1/2 inches high.

Miller notes that a cabinet to store a trash can would normally need to be 18 inches wide. In this case, because of the width of the peninsula, she designed a cabinet that is 21 inches wide. “ I use the extra room to store additional rolls,” she says. 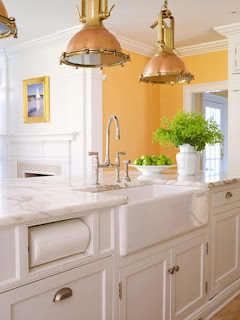 Interior designer Sarah Robertson of Studio Dearborn says that moving the paper towel holder off the counter is a nice feature for kitchens where the sink is in the island, thus avoiding having the holder standing, sentry-like, in the middle of the room. 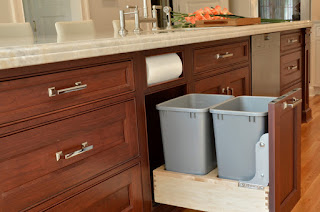 Robertson says she and her cabinetmaker have redesigned paper towel holders at least five times to improve functionality. “Previous iterations were not large enough to hold a jumbo paper towel roll,” she says. “We’ve also redesigned the dowel several times to make changing the roll easier.” 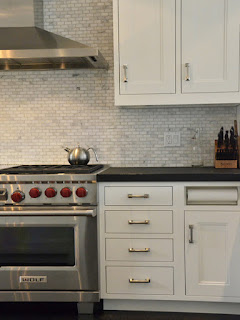 Robertson says she now makes the holders with a roomier box and spring-loaded dowels. “Make sure your cabinetmaker considers the functionality and design carefully before having this built in!” she says. 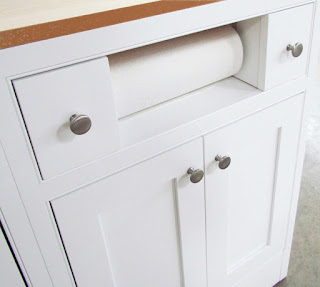 Designers at Crystal Cabinets solved the ease-of-changing problem with a customized drawer. 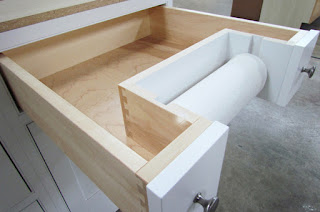 The secret is revealed when the drawer is open. You can see how the paper towel rod slides up the carved channels. 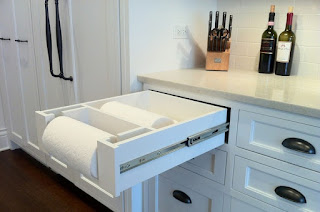 Interior designer Tom Spanier of TZS Design created a similar drawer. In his version, extra paper towels are stored at the back. 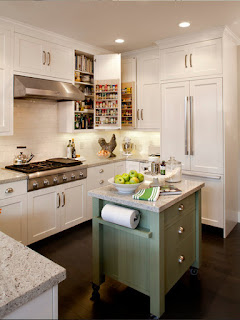 Now for paper towel holders that roll a bit differently. This one, by designer Sandra Bird, is off the counter but hangs from a more conventional wall-mounted holder. 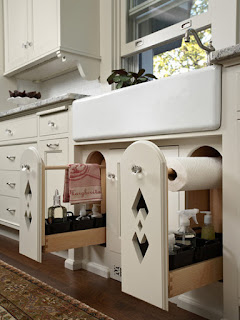 A narrow pullout drawer is home to a roll of paper towels in this kitchen by David Heide. 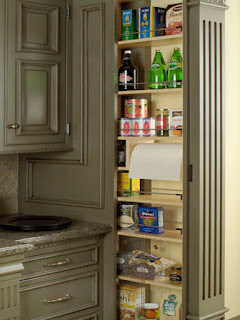 The same idea, but on a larger scale, is seen in a pullout pantry by Rutt HandCrafted Cabinetry. 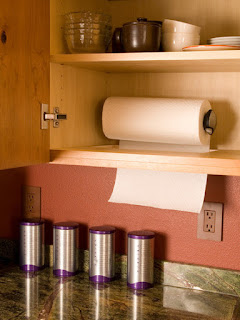 Then there’s this paper towel system by kitchen and bathroom designer Richard Landon. He says the idea is simple. “Mount the paper towel holder inside the wall cabinet near the sink. Cut a slot in the bottom of the wall cabinet and pull the end of the roll through. Shut the door, and the roll is hidden, yet the end of the roll is easily grabbed,” he says. “We use an eccentric holder [a bar that is not round]. That makes it easy to tear off a sheet.”

Many would agree that good design is in the details. These are just a few ideas to consider before you throw in the towel.